Obviously, Pianos Do Not Sing: The Happy Birthday Decision 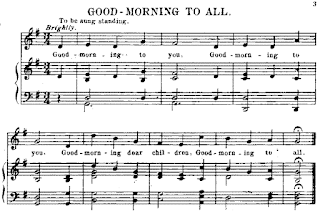 I have just finished the most complicated mystery story that I have read in a long time.  It involves three sisters, a multi‑national corporation, books published in the 1920s, lost contracts, lawsuits filed in the 1930s and a rarely used exception to the hearsay rule of evidence.  Is this the latest John Grisham thriller?  No, it is the summary judgment ruling in the case Marya, et al. v. Warner Chappell, Music Inc. – the recent decision which held that Warner Chappell did not in fact own a valid  copyright to the song "Happy Birthday to You".

Lawyers and copyright enthusiasts have speculated for years as to how this ancient song could still be subject to copyright protection. It turns out that the real story is more  interesting than anything we could have imagined.

The decision is complicated but it basically boils down to the fact that the copyright to the music of the song (actually a song entitled "Good Morning to All") expired in 1949.  The opinion is not entirely clear as to who wrote the lyrics to "Happy Birthday" (Did Patty Hill create the lyrics in 1893 at the same time as she and her sister Mildred created the music?  If so why did she wait until 1935 to come forward with this information in a deposition?) but the court does find that the Hill sisters never assigned the lyrics to Clayton F. Summy, the publisher whose company ultimately sold  the song to Warner Chappell.  Part of the proof in the case comes from a Time Magazine article discussing the 1935 lawsuit filed against the producers of a motion picture entitled As Thousands Cheer who allegedly used "Happy Birthday" without obtaining a synchronization license.  This article was admitted into evidence over a hearsay objection by utilizing the "ancient records” exception.

Ultimately, the Court found that Warner Chappell had put forth no viable argument that the Hill sisters ever assigned the copyright in the lyrics to the song to Mr. Summy.  The Court's investigation of various assignments between the parties led them to conclude that one particular document, gave Summy the right to create "piano arrangements" of the composition but "…obviou
sly, pianos do not sing."

I doubt that we have heard the end of this case, especially as the Court has not considered damages.  The plaintiffs are asking that the publisher be compelled to "return millions of dollars of unlawful licensing fees".  Could this happen? Nonetheless, this is a fascinating look at how a contemporary court deals with evaluating facts which date back almost 125 years and how these facts have significant economic consequences to major music publishers today
Posted by Trip Aldredge at 12:19 PM