It's All Latin to Me

Lawyers have become better at writing in plain English since I began to practice law in the Middle Ages. However, we could all do a better job at explaining certain things. One of the reasons that lawyers write in a certain way is to make sure that the point they are making is completely understood and not subject to interpretation. That’s why lawyers will occasionally use obscure Latin phrases. The other day I prepared a will for a client and she asked what the phrase per stirpes meant; a perfectly valid question.

Per Stirpes is legalese. It technically means a method of dividing up a share of an estate to a group or class of distributees, who take the share that a deceased person would otherwise have been entitled to. In other words, if you intend a share of your estate to go to your brother and he predeceases you AND you want the share that he would have received to go to his children, this is how you achieve that.

However, although there is an important reason to use this term in the document itself, it is equally important to make sure that the client understands what it means.

Next week we’ll discuss nunc pro tunc.
Posted by Trip Aldredge at 10:03 AM No comments: 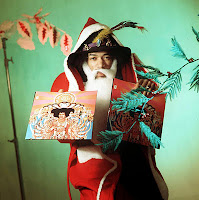 Curb v. Tim McGraw Round One

I have slowly been trying to write a short book about some of the common disputes that arise in the music business. I had just begun work on the chapter concerning recording agreements and I thought to my self, "this topic has been done to death. What else is there to write about?" Then came the news two weeks ago about Tim McGraw's preliminary victory over Curb Records in the Davidson County Chancery Court.

This case has all of the necessary elements of a legal drama – high-powered artist battles even higher-powered label over arcane language in a recording agreement first entered into in 1992.

As I understand it, Curb first sued McGraw claiming that he had not delivered the required number of albums under the agreement, even though he in fact had delivered what he considered to be the final album under the agreement in 2010 (and Curb even released a single from the recordings).McGraw has counterclaimed alleging that Curb's actions (including multiple releases of greatest hits albums) are "a naked attempt to create a perpetual recording contract, forcing Tim McGraw into a repressive environment of infinite duration …".

I am assuming that the hearing held on November 30 concerned Curb's attempt to enforce the injunctive relief provisions of its agreement and to keep McGraw from recording for another label during the course of the litigation. I have reviewed McGraw's answer and counterclaim and have to say that it is one of the most eloquent pleadings I have ever encountered. (here's a link:www.tennessean.com/assets/pdf/DN174765524.PDF). It literally reads like a novel where you follow McGraw's career from 1992 through 2010 as well as a textbook analysis of how the delivery process and recording restrictions in a recording agreement can be manipulated.

I don't know how this will play out but if it goes further it will provide fascinating insight into some of the more esoteric provisions of recording agreements, often ignored during negotiations. It may also show us how some these overlooked provisions might come back to bite both parties.
Posted by Trip Aldredge at 2:37 PM No comments:

A Special Place in Hell

I read with visceral disgust an article in last Saturday’s Wall Street Journal about a new specialty of debt collectors, who contact the relatives of deceased people who have died leaving debts, and try to convince them that they have a moral obligation to pay the debt. This is a growing business. One such company advertises its services as “a proven approach that yields high returns at a low risk to the client’s reputation.” Translation: we can get your money without making you look bad for harassing grieving widows and orphans.

A relative is not generally responsible for a decedent’s debts unless they were jointly liable prior to the death (e.g. a joint credit card account or a mortgage). If someone dies leaving a will or dies intestate (without a will) with debts and assets the survivors will have to deal with all of this. This is what the probate process is for. It can be hard enough dealing with probate and dealing with the inevitable collection agencies that refuse to recognize the fact that someone may actually be dead (you would not believe some of the automated letters I have seen). However, to claim that the survivors somehow have a legal or a moral duty to pay these debts out of their own pockets is both reprehensible and in violation of Federal Law. It’s hard enough to deal with the loss of a loved one and to settle their affairs- but to be bullied and lied to during the process is repugnant. There is a special place in Hell for these folks.
Posted by Trip Aldredge at 11:20 AM No comments: 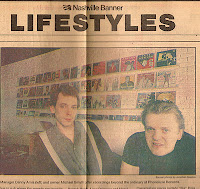 I love used record stores. My favorite job ever was working at the Great Escape in Nashville where my duties included running the store’s rare record auctions. Accordingly, I have been honored to represent Phonluxe Records since the company’s founding in 1987. The store is run by Mike Smyth, an Englishman who knows more about American music than anyone I know and Jeff Knutson, ably assisted by a dedicated group of music aficionados, who are friendly and lack the whole High Fidelity vibe.

Mike is one of those people who truly understand the consumer side of the record business. When the CD revolution began in earnest in the early 90’s, Mike began buying the vinyl records everyone was so happy to get rid of. Now, having carefully preserved these treasures, he’s happily selling them back to these same people. I imagine that he’s now buying up used CD’s patiently waiting for the day that America’s youth tire of MP3’s.

Earlier this year, the store switched from a traditional 7 days a week schedule to being open only Friday through Sunday. The results appear to be really positive; it somehow emphasizes the special, rewarding experience of shopping at Phonoluxe. I love the fact that I can go in there with a record in mind and leave with something else that I didn’t know I needed until I found it.

Here’s to another 25 rockin’ years.
Posted by Trip Aldredge at 2:22 PM No comments: