Is 17 USC 205(e) a Trap for the Unwary? Advice to Puiblishers and Administrators


Not long ago I was involved in what should have been a routine lawsuit over a collection of past-due royalties.  At some point during the litigation the other side brought up 17 USC 205(e) as a possible defense.

For the unaware this little-discussed section of the Copyright Act states:

A non-exclusive license, whether recorded or not, prevails over a conflicting transfer of copyright ownership if the license is evidenced by a written instrument signed by the owner of the rights licensed…and if

(2)        the license was taken in good faith before the recordation of the transfer and without notice of it.

Section (1) is a no-brainer but Section (2) is a potential landmine as it gives a possible defense of innocent infringement in a case where a licensee claims to have acquired rights without notice of the prior assignment (for example from an artist or a songwriter).

I researched the statute pretty carefully and could find no reported cases dealing with it specifically although there are plenty of cases that explore similar territory and those cases generally come down on the side of the copyright owner (see for example Douglas v. Hustler Magazine, Inc., 769 F.2d 1128 and Symnatec Corp v. CD Micro, LLC, 286 F. Supp. 2d 1265) which states plainly “failure to record an assignment of copyright is not available as a defense to infringement”.

Nonetheless despite the comfort these cases offer this odd statute does seem to present some kind of defense in those rare cases where a licensee could actually prove that it  had no knowledge of a prior transfer of copyright ownership.  The lesson here for all publishers and administrators should be to always record copyright assignments and related documents as soon as possible after execution.
Posted by Trip Aldredge at 3:59 PM No comments:


My wife tells me that I read entirely too many music books.  Also, as an attorney, I must confess to a soft spot for legal thrillers.  If you put the two together, I can guarantee I’ll read it.  (Right here is a good place to praise Stan Soocher’s They Fought the Law,  one of the best nonfiction music/legal books out there – a fascinating read). 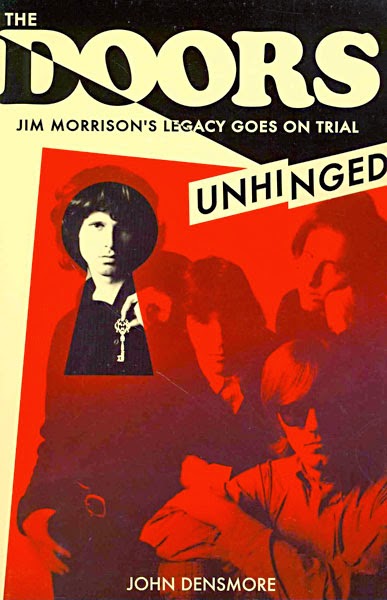 However I want to write about John Densmore’s The Doors Unhinged (Percussive Press 2013), an engrossing first-person account of Densmore’s lawsuit (and ensuing counterclaim) against Robby Kreiger and the late Ray Manzarek).   The subtitle  of the book is “Jim Morrison’s Legacy Goes on Trial” and that is pretty accurate.  Music fans with long memories may recall that in 2004, Densmore sued his former band mates for violating the Door’s longstanding partnership agreement and touring with another singer and drummer as “The Doors.”  Kreiger and Manzarek filed a counterclaim against Densmore suing him for a mere $40 million, essentially for breach of fiduciary duty to the band partnership because of his failure to agree to license the band’s songs for various commercials.

Early in the book Densmore recalls how the late Jim Morrison was vehemently  against the use of The Doors’ songs in commercials.  Densmore felt that he had to honor Morrison’s legacy and the band’s original partnership agreement by continuing to veto any commercial exploitation of the band’s music.  There is a fascinating section where Densmore discusses The Doors’ original attorney, Abe Somer, and the band’s original partnership agreement.  We forget sometimes that there was a formal music business back in the ‘60s and this section of the book fascinates me.

All of this leads to a trial in civil court in Los Angeles.  Densmore’s depiction of the trial is spot on.  He gives a wonderful description of his own counsel Jerry Mandel as well as opposing counsel John Lavely.  People are strange and it is really strange to see icons of a generation reduced to spiteful litigants but it is this inherent drama of Morrison’s legacy versus 21st century economics that makes this story so compelling.  Of course you root for Densmore and his ideals but you can’t help but feel sympathetic to Robby Kreiger and Ray Manzarek when faced with the opportunities to profit off of work they did 40 years earlier. It would be hard to resist.  Densmore also gives a great description of the life of a lawsuit from the discovery phase through the actual trial itself where monotony goes head to head with angst and fear until the trial itself becomes almost a new daily reality for the litigants.

As in all legal thrillers, I won’t tell you how the book ends.

If I have any criticism, it is that the last chapter is totally unnecessary and a bit self-serving.  Still, one is left with the impression that Densmore is one of the good guys.  As Tom Waitssays in the blurb, “John Densmore is not for sale and that is his gift to us.”  I highly recommend this book to fans of The Doors and to those with an interest in the legal inner workings of a rock and roll partnership.
Posted by Trip Aldredge at 6:34 PM No comments: