Beatles History Lesson...You Do The Math 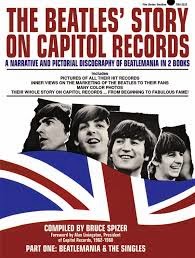 For half a century (!) Beatles' fans have been debating the fact that Capitol Records released different versions of the Beatles' recordings than their British counterpart Parlophone Records, a practice that lasted through the release of Revolver.  Capitol generally released albums with fewer songs, combined songs from different UK albums or EPs or created completely different compilations of songs.  First generation American fans are still jarred when they hear the British versions of albums like Help!  and Rubber Soul. On the other hand, this practice led to some purely American classics like the Beatles’ Second Album and of course Yesterday and Today.

I've always subscribed to the theory that this practice was motivated by pure greed, i.e. Capitol could sell more records if they offered less songs per album than the British company.  I think that my theory has been slightly modified by the esteemed Bruce Spizer.  As an aside, all Beatle fans owe a debt of gratitude to Spizer, a New Orleans tax attorney who has published a series of fascinating and detailed books on the history of the Beatles' recordings in both the United States and England.  Although expensive, his books are well worth seeking out.

In his book The Beatles Story on Capitol Records Volume 2, Spizer points out that in 1964 the statutory mechanical royalty rate (i.e. the amount the record company had to pay the music publisher per song per record) was 2 cents.  By contrast the rate today is 9.1 cents.  To quote  Spizer "although this may sound trivial today a reduction in the number of tracks on an album could cause significant savings when considering the value of money at that time."  Spizer goes on to say that by putting 12 songs on an album instead of 14 (as most British labels did) the company could save $40,000.00 per each million records sold and they could save an additional $20,000.00 by reducing the number of tracks to 11 (Spizer, P. 24).

That's obviously a lot of money in 1964 dollars – according to the consumer price index calculator $60,000 in 1964 would be $461,309 today.  Of course all of this sounds silly when you're talking about the Beatles catalog but remember that no one in the record business in 1964 figured that this music would still be around in 50 years (or  that we would be gladly buying the records over and over) It's even more interesting to look at the Beatles' artist royalty rate on their early recordings, but that's another story.

Revisiting the Holographic Will


It seems that it is always a good time to review this.  The other day a client asked me if an elderly friend could “dictate” the terms of his will and then sign the transcribed document.  In Tennessee, the answer is no. 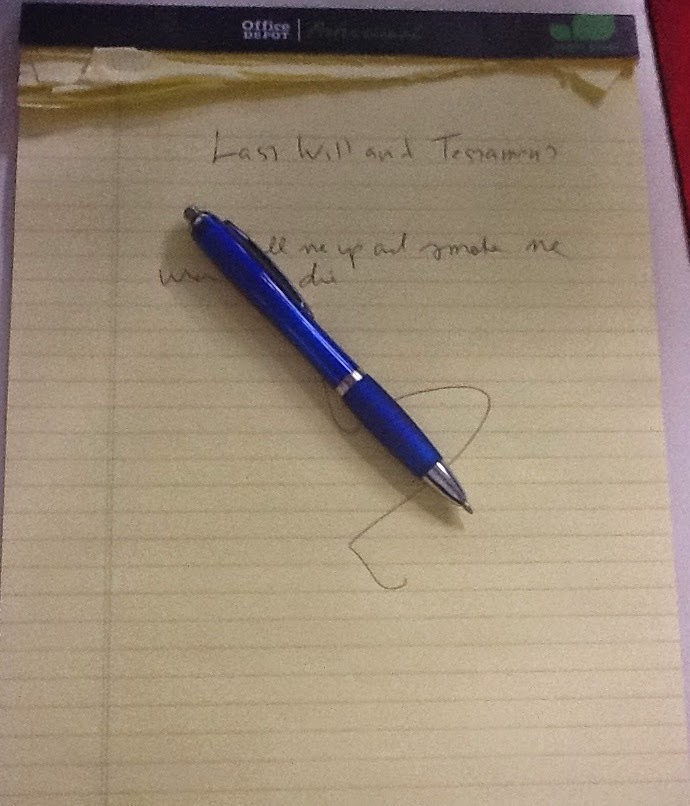 The only significant exception to this is the holographic will which is defined in Pritchard on Wills and Administration of Estates (5th Ed.) as “a paper writing appearing to be the last will of a deceased person, all the material provisions of which are written in his own handwriting” and “the testator’s name must have been subscribed to it, or inserted in some part of.”  There must be proof by at least two people that they recognize the deceased’s handwriting.

Note the important part – all the material provisions must be in the testator’s own handwriting.  This is the part that seems to get so often overlooked in the age of word processing.

The bottom line is this – there is nothing wrong with someone writing their own will – but it must meet all of the requirements of a holographic will.  If not,  it is completely void. People have occasionally said to me that they don’t mind the document being void as long as it expresses their intent, but this is meaningless. If you die without a will your property passes by the laws of intestate succession—which may or may not be what you intended.  In this era of online will kits and the like, the crucial distinction between a holographic will, a properly attested will and a legally void document often gets overlooked.  This is one of those important times when it just makes good sense  to review the terms of the will with an attorney and have them handle both the preparation and execution of the document itself.
Posted by Trip Aldredge at 1:04 PM 3 comments:


One could create an entire law school curriculum on the legal battles of George Clinton.  The latest reported case from the United States Court of Appeals for the Ninth Circuit illustrates the unique relationship between entertainment law, copyright law and creditor's rights.

Apparently George Clinton owed his former lawyers, Hendricks & Lewis over 1.7 million dollars in legal fees.  The firm sued Clinton, received a judgment and was able to convince the trial court to appoint a receiver and take custody of four of Clinton's iconic master recordings including "The Electric Spanking of War Babies" and "One Nation Under A Groove" for the purpose of maximizing "the income stream from the Funkadelic master sound recordings without selling or otherwise permanently disposing of the copyrights".  (Note that this is different from the initial press reports that seemed to indicate that the law firm ended up with ownership of the masters).  The goal apparently is for the receiver to exploit the recordings, pay the judgment creditor and then return the masters to Clinton. 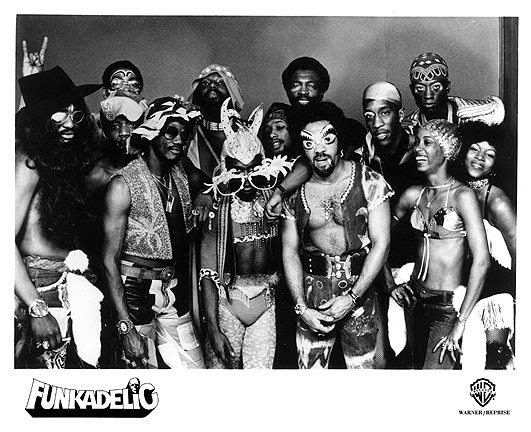 Clinton argued that the assignment of his recordings by the Court to the receiver violated Section 201(e) to the Copyright Act which prevents authors from "involuntary transfers" of their copyrights.  However Section 201(e) clearly states that it only applies "when an individual author's ownership of a copyright or of any of the exclusive rights under a copyright has not been previously transferred voluntarily by that individual author."  By the terms of the Warner Brothers agreement Clinton was either not the original "author" of the sound recording or being the original author he voluntarily assigned his rights to the record company, thereby losing the protections of Section 201(e).

The case is primarily relevant  because it establishes the important point that in some instances copyrights can be subject to execution to satisfy judgments and that although copyright is in the  exclusive domain of federal law the courts will look to state law to interpret how the execution will proceed from state to state.  This is important to both collection lawyers and to artists and writers and other copyright owners seeking to protect their copyrights in the event of litigation.
Posted by Trip Aldredge at 4:03 PM No comments:


I am a preservationist.  I live in an historic district in a Victorian home that my wife and I have painstakingly restored and renovated.  I love old houses and buildings and hate to see them torn down.  That's my bias.

At the same time, I am not an absolutist.  I studied historic zoning in law school and I know the Constitutional arguments pro and con.

Like many Nashvillians, I was surprised but not shocked to learn that the RCA Building (which includes  Studio A) on Music Row was about to be sold.  I read Ben Folds' open letter to the powers that be trying to save Studio A from demolition. My wife and I attended a rally as Studio A on June 30 and listened to eloquent, impassioned speeches from Folds, Dave Pomeroy and many more people about the need to preserve the "music" and  Music City before it becomes Condo City.

The very next day I read property owner Harold Bradley's stunning rebuke in a letter where he basically said that he and the late Chet Atkins had been trying to unload this piece of property for 24 years and that it had no historical value or cultural relevance whatsoever.

I have a great deal of respect and empathy for Harold Bradley but I think that he is mistaken.  Sometimes those involved in making history are not the best judges of their own contributions.

I spent the first 20 years of my career in various offices on Music Row.  Like most people who work there, I probably wasn't noticing the architecture because I spent my time driving through the alleys from building to building and  trying to avoid the tourists driving the wrong way down 16th Avenue South.  But I have always admired the RCA Building.  To my eyes, it is a great example of mid‑century modernism and a symbol of all things "Countripolitan"-the sound and the magic that Mr. Bradley, Mr. Atkins and their peers created.  To my mind it is important that we preserve the RCA Building just like it is important that we preserve the recordings that were made there and the stories of how those recordings were made and the people that made them. 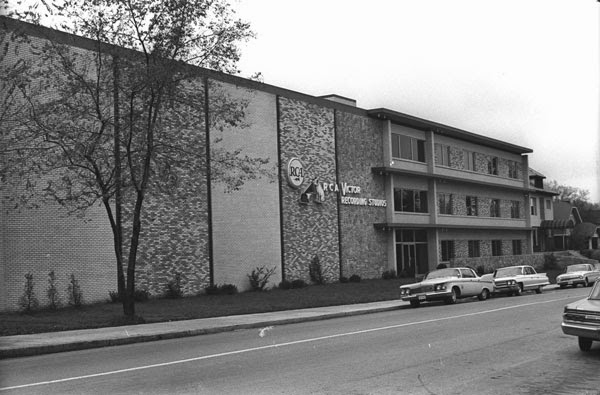 One of the things that struck me when I visited the RCA Building last week was that it was not a dormant relic.  Most of the offices looked occupied by living, breathing music businesses and the studio itself was large and vibey ‑ in that way that all great studios are.  More importantly, it was active. This is one of my main complaints in dealing with the developer versus historic preservation issue:  Why tear down something that is still useful and vibrant?  As Ben Folds alluded, it really goes to the fabric of a city.  Music Row is famous for reasons and the music business developed there for a reason.  There is positive energy created by all of these music businesses operating in proximity to each other. Music Row  is one of the first places out‑of-town guests want to see when they hit Nashville and as record companies and publishers vacate the area it's getting more and more difficult to find much to showcase ‑ the RCA Building and Studio A is a shining exception.

Obviously, no one is suggesting that the building owners be stripped of their property rights but this is a wakeup call for a public/private discussion of the steps that could be taken to preserve this landmark building before it is too late.  Remember that Liverpool tore down the Cavern Club only to rebuild a replica across the street.  Memphis razed Stax Records only to rebuild a Disneyworld-like replica in the same spot because it realized its error.  Nashville does not have to make the same mistake.  Start the discussion.
Posted by Trip Aldredge at 4:08 PM 1 comment: