Behind Every Succesful Album There is a Lawsuit 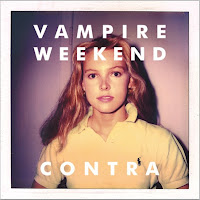 A model named Kirsten Kennis has sued the band Vampire Weekend, its label XL Recordings and others for $2 million claiming that she did not authorize the use of her photograph on the cover of the band’s successful album “Contra”. Apparently Ms. Kennis alleges that her signature on the photographer’s release form was forged. The photo was apparently taken in 1983. Making sure that one has secured a release from any person appearing on album artwork is a standard practice and it seems strange that that practice might not have been followed in this case. Indeed, a spokesperson for the label was quoted as saying “As is standard practice, Vampire Weekend and XL Recordings licensed the rights to use the photo on the cover of Contra pursuant to a license agreement that contains representations and warranties authorizing this use of the photo.” (that actually sounds more like a lawyer than a spokesperson). This case could conceivably have implications for photographers, art directors etc. The case will probably settle but it would be interesting to know what the actual value of the model’s image is worth.
Posted by Trip Aldredge at 9:42 AM No comments:

According to a report in the Wall Street Journal, Realitykings will assert the Fair Use doctrine stating that the songs were used as "part of a commentary of popular night club culture."

I have not, err, umm, reviewed the evidence, but unless the clips are short live excerpts from “popular night clubs,” I doubt very seriously that Fair Use can stretch this far.

I thought about this case last night when Bette Midler’s version of “The Boogie Woogie Bugle Boy of Company B” turned up inexplicably on my i-Pod. That song was involved in a lawsuit in the late 1970’s between MCA Music Publishing and an off-Broadway musical called “Let My People Come – A Sexual Musical,” where the words were changed to describe something other than blowing reveille. The Defendants lost that case, the Court holding that whatever purpose the defendants were attempting “did not justify the unwarranted use and abuse of ‘Bugle Boy.’ ”

Although the cases are not similar, both do remind us of the outer limits of the Fair Use defense, which is, to paraphrase Samuel Johnson, “the last refuge of the scoundrel.”
Posted by Trip Aldredge at 3:45 PM No comments:

"Lawyers, I suppose, were children once."

-Charles Lamb, from the epigraph to Harper Lee's "To Kill A Mockingbird" (1960)
Posted by Trip Aldredge at 9:44 AM No comments:

I am always reminding people of the necessity of drafting wills, in order to take care of estate planning before there is an urgent need. However, any urgency I could suggest pales in relation to that faced by Jonathan Jennings. The Nashville Retrospect, which is fast becoming my favorite local reading, recently reported on the discovery of Mr. Jennings’ will, executed in 1780. Mr. Jennings, it appeared, had been mortally wounded by Delaware Indians in what is now my neighborhood in East Nashville. This will was apparently the first will to be recorded in Davidson County, Tennessee and states as follows:

In the name of God Amen. I Jonathan Jennings of North Carolina on Cumberland River having this day Received several wounds from the Indians and calling to mind the mortality of my Body do make and Ordain this to be my last will & Testament. And first of all I give and recommend my soul to God that gave it and my body to be disposed of at the Discretion of my executors. And as touching my Worldly affairs I dispose of them in manner following Viz… Item… I give and bequeath to my… It is my Desire that my Estate be Equally divided between my Wife my sons William, Edmond, Elizabeth Haranor Mary, Aggy, Anne & Susannah all but such a part as shall be hereafter disposed of … Item… I give and bequeath to my son Jonathan who was Scalped by Indians and rendered incapable of getting his living a Negrow girl Milla & her increase who is to remain with my beloved wife till my son comes of age. Also a Choice Rifle Gun & a Horse and Saddle Item I give my beloved wife Four Choice Cows and Caves. The Wards Milla and her increase and the Ward Jonathan being interlined I devise that my Loveing Wife and my son Edmond be Executrix & Exectutor of this my last Will & Testament, Jonathan Jennings…Signed Sealed & Published in Presents of Zach White, Js. Robertson, William Fletcher

This is pretty fascinating reading and another reminder of the need for proper estate planning, at nearly every stage of life. It also gives me a whole new perspective on my East Nashville neighborhood.
Posted by Trip Aldredge at 2:12 PM No comments:

I read an article in the Tennessean last month about the need and demand for free legal services in Tennessee exceeding the supply. The article pointed out that individuals facing criminal charges are constitutionally entitled to legal representation. But of course, this same guarantee does not apply in civil court. This is a major initiative of Tennessee Supreme Court Chief Justice Janice M. Holder, who recently unveiled the Court’s Justice For All program. The article mentioned the three primary ways that indigent people find legal assistance.

First, there is the Legal Aid Society, which represented almost 1,100 cases last year, but had to turn down many more cases.

Second, there is the traditional pro bono attorney. All attorneys are required by the Code of Professional Responsibility to do some amount of pro bono work, and despite the nasty image people often have of attorneys, most attorneys I know do pro bono work willingly and enthusiastically. The joke around most offices is that attorneys don’t mind doing pro bono work, we just like to be able to decide which ones are the pro bono ones.

Finally, I note that the Nashville Bar Association has launched a Modest Means Panel which will attempt to match attorneys with clients who have legal problems but can only afford to pay a certain amount per hour (in this case, no more than $75).

The reality is that most people cannot afford legal services on any kind of regular basis, and an unexpected legal emergency can be just as devastating as a medical emergency. One of the points I try to raise with folks who have questions regarding contracts or other business issues, is that they should not be afraid to consult with an attorney to avoid potential legal troubles later. I think all of us are in a position of wanting to help people and help them keep their legal problems from expanding.
Posted by Trip Aldredge at 12:19 PM No comments:

Everyone should see a glacier at least once. It puts things into perspective.
Posted by Trip Aldredge at 8:44 AM No comments: