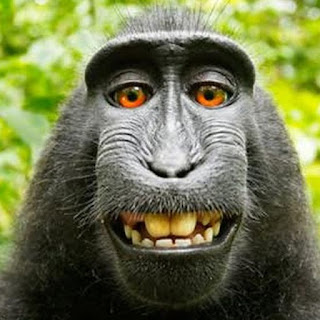 Lawyers often struggle trying to come up with novel legal strategies to help their clients achieve their aims.  However  there must be some sort of award for creative advocacy for the lawyers at Irell & Manella who represented Naruto, the now‑famous macaque from Indonesia in the so‑called "monkey selfie" case.  As anyone who follows this knows, Naruto is the animal who used photographer David Slater's camera to take several well-executed self-portraits.  Slater, a nature photographer understandably exploited  the photographs,  causing Naruto, or rather PETA on Naruto's supposed behalf,  to file suit to assert a copyright in the work.

It is a funny question but it does make one think about fundamental issues underlying copyright law.  One of the examples I always use when I teach copyright law is to ask students to explain why photographs are capable of copyright protection.  The answer must always depend on whether or not the image in question contains a sufficient amount of originality.  If a monkey presses the button on a camera,  is that an act of original expression?  (See also the "monkey typewriter theory hypothesis theorem" i.e. any monkey with a typewriter …).

Interestingly, the argument, as expressed in the plaintiff's brief in opposition to Slater's motion to dismiss the lawsuit really doesn't address the issue as much as it takes on  the Copyright Act's definition of "authorship".  The Copyright Act defines the "owner" of a work as "initially" the "author" of the work but does not define "author".  This fact is curious in that the Act explicitly defines nearly every other term but as courts have recognized, the word "author" is actually used in the United States Constitution.

Since the word "author" is not defined, Naruto argues that the Act cannot exclude non‑humans and that animals should have equal standing as humans in terms of their ability to create and protect their works.  All of this may sound eccentric but the brief is fascinating.  It touches not only upon works by animals but also  computer-generated art and "divine works of celestial beings".  More importantly it addresses the fact that before the Civil War, slaves were not allowed to obtain patents because although they were clearly capable of inventing things, they were not allowed to own property.

I don't actually agree with the plaintiff's argument here (neither did the Ninth Circuit) but I think the brief is compelling and something to consider as we move into new areas of artificial intelligence and are confronted with new questions as to what is and is not capable of copyright protection. Naruto may be a trail blazer.
Posted by Trip Aldredge at 3:12 PM No comments:


It seems that recently I have been answering a lot of questions about songwriting (not the process itself – I would probably have to quote Lou Reed here "One chord is fine.  Two chords is pushing it.  Three chords and you're into jazz.").

No, these are basic questions that seem to have a lot to do with co‑writing and the general business of dealing with other people in what is essentially a solitary creative art.

I kept wishing that I had  a resource I could suggest to these folks and I realized that the answer was right in front of me.  My friend, Cliff Goldmacher has a fantastic web site called The Educated Songwriter (http://www.educatedsongwriter.com) where he offers consultations, webinars, books and most importantly a regular blog.  The blog is a great resource which offers advice on the music business, technical aspect of recording, co‑writing and the craft of writing in general.  It's really good stuff.

I have known Cliff as a songwriter, producer and studio owner.  He's a smart,  talented guy and it makes sense that he can demystify many of the arcane aspects of songwriting.  I recommend The Educated Songwriter to anyone interested in learning more about the craft and business of songwriting.
Posted by Trip Aldredge at 3:03 PM 1 comment: