I Discover who is keeping the Music Industry Afloat

I recently uncovered a very little known fact. I know who is keeping the music industry afloat. Me. I am financing it on my Visa credit card. This began when my 13 year old daughter received an i-Phone for Xmas (I’m not sure how I lost that battle). She had previously been aware of the world of i-Tunes but for some reason, it was not attractive to her. She was content to own conventional CD’s and listen to the strange amalgam of hiphop, bad rock and country that makes up Top 40. However, once she had the i-Phone, she decided she had to own the songs. Delighted by her new interest in music, we encouraged friends and relatives to send her i-Tunes gift cards for holidays, etc. When my daughter told me that Apple required a credit card to open an i-Tunes account, I naively obliged. Everything went fine while she tore through her gift cards, downloading everything from Ke$ha (hey, they went to the same school) to Lady Gaga. What I didn’t realize (and in fairness, I don’t think she realized either) was that once the gift cards ran out, she just kept going, savoring the cornucopia that is i-Tunes. I did not see the damage until I received my credit card bill a month later.

I am trying to imagine the damage I could have done if my mother had let me loose in a record store with $170 at age 13. The interesting point here is that this is a true demonstration of the fact that the singles mentality is now fully entrenched. While my daughter is passionate about the songs she wants to have on her i-Phone, she could care less about owning the entire album (except in the case of Taylor Swift), or even owning the physical product. Similarly, when the news of Alex Chilton’s death broke (R.I.P. Alex), several people told me they went to i-Tunes to download his music. I am seeing first hand the major sea change people in the industry have been talking about. The nerdy record collector in me hates it, but it certainly seems to show that the industry still has some signs of life.
Posted by Trip Aldredge at 1:20 PM 1 comment:

Otis Blackwell inducted into the Rock and Roll Hall of Fame 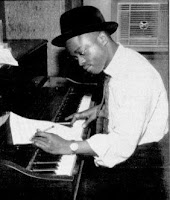 Congratulations to the late great Otis Blackwell for his induction into the Rock and Roll Hall of Fame. They should have done it a long time ago, when he was alive. I had the privilege of serving as Conservator for Mr. Blackwell and his wife for a number of years. I was happy to see that two of his children, Otis Jr. and Odette were able to accept the award on his behalf.
Posted by Trip Aldredge at 10:39 AM No comments:

I was saddened to learn that former Nashville attorney Steve Miller died in July of last year. I just came across this information in a Vanderbilt Law School alumni publication. I had been thinking about Steve recently because I used to see him downtown all the time. I had not realized that he moved to Eagleville, Tennessee in 2006. Steve was a good lawyer and a nice guy.
Posted by Trip Aldredge at 2:13 PM No comments: