Music and law often interact in interesting ways.  Lately, I have been thinking about a record that for whatever reason had a big impact on me thirty years ago – Marvin Gaye's Here My Dear a double-album released at the end of 1978. 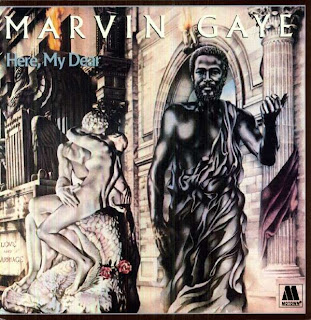 What I had nearly forgotten was the fact that the album was designed by Gaye and his attorney as part of a divorce settlement with his first wife (Berry Gordy's sister) Anna.  Ostensibly, because Marvin could not afford to pay alimony or child support he and his attorney came up with the concept of assigning the royalties from his next album  to his former spouse – and like the great artist he was, Marvin took the concept and ran with it.  Many artists have done "break-up" albums (David Allen Coe, Bob Dylan and Bryan Ferry come to mind) but Marvin Gaye traces the entire course of a relationship from beginning to painful end.  All of this is contained in one of the most over-the-top sleeve designs of the '70's.  The album also contains one of the great romantic couplets of all time:  "Somebody tell me please, why do I have to pay attorney's fees?".

Marvin Gaye was a troubled soul but a genius whose career was tragically cut short.   His contributions to music are legendary; it is nice to be able to note his singular contribution to family law.
Posted by Trip Aldredge at 7:40 AM 2 comments:


I just looked up and realized that I have been back in my solo practice for 10 years this month. This follows 4 years where I was associated with a firm, 9 years before that when I was first in solo practice and about 6 years when I was in my first partnership with my friend Ken Levitan.  The last ten years have gone by in a blink of an eye. Seriously. It’s shocking to me that I have been in practice for 29 years. I have gone from being one of the young lawyers to being one of the old guys.

These last 10 years have been interesting, challenging and ultimately rewarding-although I don’t always acknowledge it.  A lot of the things that worked during my first years of solo practice no longer work. A lot of things work better. The traditional models of the entertainment world are gone. For a lot of artists, that’s a good thing. For everybody else, I think they are still feeling their way through this period of immense change; but it all feels really positive.

So, in the season of Thanksgiving I would like to sincerely give thanks to my clients, friends, family and other attorneys, all of whom have supported me while I try to continue the mission of this law practice—to help people deal with complicated issues both in and around the music business.  I want to get  better and smarter at doing this and I look forward to another 29 years.
Posted by Trip Aldredge at 10:43 AM No comments: 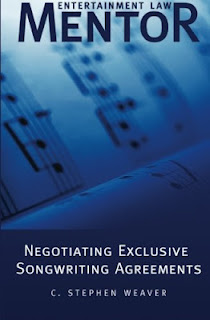 I have been meaning for some time to write about my friend Steve Weaver’s book Negotiating Exclusive Songwriting Agreements.  This is not really meant to be a review because I am biased.  I reviewed Steve’s manuscript and was honored to write a blurb for the back of the book.

What I said in my blurb is true.  There are so many worthless books on the music business and precious few books that tell you exactly what stuff means and how it works.  Steve’s book is a step-by-step analysis of an exclusive songwriting agreement,  meaning he analyzes each paragraph of the agreement from both the writer’s perspective and the publisher’s perspective and explains why each party asks for certain things and resists certain things.  This is really important information for anyone who is trying to get a handle on how these agreements are supposed to work.  One of the other things I said in my endorsement was that I wish this book had been available at the beginning of my career.   As a young lawyer, it really can be difficult figuring out how certain entertainment contracts are supposed to work and it can be difficult to know when you are asking for too much or too little. However, this book is not just for attorneys.  Anyone with more than a passing interest in music publishing can benefit from this book. The only other book that I have found as helpful as this is Randy Poe’s A Songwriter’s Guide to Music Publishing and I don’t know if it’s still in print.

Steve has indicated that he hopes to write other books in this series “Entertainment Law Mentor” and I think he could do a great service  for the industry if he does write similar books on such topics as  recording agreements, producer agreements, manager agreements, etc.

As Webb Wilder says “pick up on it.”. It’s available here as a Kindle edition: http://www.amazon.com/Entertainment-Law-Mentor-Negotiating-ebook/dp/B009INKQVS/ref=sr_1_1?s=books&ie=UTF8&qid=1353348800&sr=1-1&keywords=Negotiating+Exclusive+Songwriting+Agreements as well as in a physical format.
Posted by Trip Aldredge at 10:19 AM 1 comment:


For those of us who first studied Copyright Law in the 1980s there is no more venerable name than Melville Nimmer.  Professor Nimmer's treatise Nimmer on Copyright is the most comprehensive guide to all questions of copyright law, large and small. I still refer to my 10 volume set of the treatise religiously. 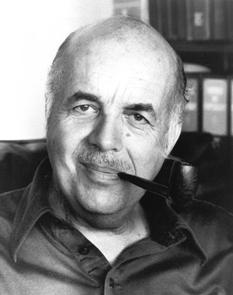 What is perhaps even more significant about Nimmer is that even though Melville Nimmer himself died in 1985, his work has been continued by his son David Nimmer since that time. .  The collective oracle is always simply referred to as "Nimmer".

According to a recent article by Devlin Hartline on the web site Copy Hype, David  Nimmer has recently changed his position on what the exclusive right "distribution" means under the Copyright Act.  Apparently, up until this year, Nimmer took the position that distribution required an "actual dissemination of works to the public" but now he defines "distribution" as simply  as "making available" the copyrighted work to the public.

Nimmer's original interpretation was important because it was this interpretation the Court of Appeals relied on to give Jammie Thomas‑Rasset a new trial in her well-known copyright infringement case with the RIAA (i.e. since the plaintiff record companies could not prove that anyone actually downloaded the songs she had posted, the court did not believe that actual distribution could be shown).  Although the ruling ultimately did not help Thomas‑Rasset it did give encouragement to others who are fighting similar cases. Somehow though, it did not seem right.

However a law professor named Peter S. Menell apparently convinced Nimmer that the legislative history of the 1976 Copyright Act clearly demonstrated that Congress meant to make "making available" identical to "distribution". I am pleased to hear this on several levels. First, from a practical standpoint, it always seemed to me that “distribution” should be defined as ‘making available’. This made sense in the brick and mortar world and it makes more sense in the internet world.

Perhaps more importantly, I am comforted to see anybody, be they an academic or a politician change their position based upon the facts, especially those facts contained in legislative history. It is a sign that intelligent and thoughtful analysis has not been completely replaced by blind adherence to dogma. It is also a sign that our Copyright Act remains flexible and adaptable to the constant march of technological change. This is a good thing.
Posted by Trip Aldredge at 10:14 AM 1 comment: