The Associated Press reported last week that it is now legal, at least in , to serve legal process through Facebook. Imagine the possibilities for litigation in the U.S. Think of how many people don’t seem to have physical addresses or land lines but have active presences on Facebook, My Space and other sites. In my own practice, I have been able to locate a few difficult to find characters through these sites. I don’t know if this development is exciting or troubling but it certainly points to the future of Civil Procedure. Perhaps next we will be suing avatars on Second Life.

I have been meaning to write something about the creative legal assaults on the RIAA filesharing lawsuits. First, I was impressed by the fact that Jammie Thomas’ attorney Brian Todder had convinced the court to overturn the jury verdict in her trial in and I was similarly impressed by a Harvard law professor’s constitutional challenge against the RIAA in his defense of student Joel Tennenbaum. I am not an advocate of illegal downloading, I just think that the file sharing lawsuits are not the right way to address the problems of the record business.

However, I was not prepared for the article in the Wall Street Journal which indicated that the RIAA was poised to abandon its legal assault on file sharing. The article did not specifically say whether the decision would affect all existing suits or simply apply to new suits. There is also some potentially troubling news about an alliance between the RIAA and various ISPs that sounds a little like the Patriot Act ver. 2.I can’t help but think that some of these recent developments made the RIAA less confident of their strategy. On the other hand, perhaps they finally realized the stupidity of suing their own customers. This was a bad idea to begin with. As far as I can tell, the lawsuits had no discernible effect on the worst offenders. The music industry needs to find a way to embrace the new generation of music fans and bring them into the fold. I don’t know if anybody has the idea but lots of people have good ideas. I am old enough to remember some of the great marketing Warner Bros. did in the late ‘60s and early ‘70s which made people life long fans of many of its acts. They basically gave away a lot of free music to anyone who would pay for postage. I can’t help but think that this was more effective than suing a bunch of college students and high school kids. 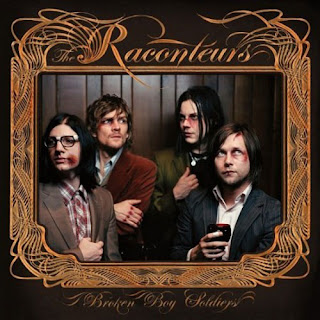 Recently, the Tennessean reported that Jack Lawrence of Nashville’s Raconteurs (you know, Jack White’s other band) has been sued by his former girlfriend, Kelli Craig, who claims that in addition to a ten year romantic relationship, they were in fact engaged in operating a business partnership. According to the Tennessean, which reviewed the pleadings, Craig alleges that under the terms of their oral partnership, “she would support () so that he could pursue his music career and, if and when he began earning money as a musician, they would divide the money as partners.” Apparently, bought a house, titled solely in his name in 2007. When the couple broke up, Craig refused to leave the house. filed a detainer warrant to force her out of the house and she countered with the partnership lawsuit. (The most terrifying aspect of the Tennessean article was the revelation that Craig apparently has also refused to return ’s record collection). Craig’s lawsuit has already survived a motion to dismiss, which means that unless a settlement is reached, the case will head to trial.

This case is worth analyzing and is worth taking seriously. courts do not routinely hold that all unmarried couples are in fact operating partnerships. In Martin v. Coleman, the Tennessee Supreme Court stated that they would not rule that an unmarried couple could create an implied partnership simply by continued cohabitation (79 S.W.3d 757,761 2000). But courts have also applied a partnership analysis to specific situations involving unmarried couples. In Bass v. Bass, the Court applied the classic legal definition of a partnership ( “a partnership is an association of two or more persons to carry on a business for profit”) (814 SW2d 38 1991) to a domestic situation. Thus the law seems to be that if a former flame can establish the elements of partnership, he or she might secure an interest in the earnings from the other party’s career. Perhaps more significant to this current dispute is the holding in Montgomery v. May (181 SW 3d 720, Tenn. App 2005) which held that in scrutinizing a real estate purchase the court will look to how the property was purchased (e.g. whether both parties contributed funds) rather than strictly how the property is titled.

As a practical mater, I am not sure how a couple is supposed to address these kinds of issues (kind of a romance killer) and I am sure there are equities on both sides of this ugly dispute. If this case unfolds, it should be watched closely by attorneys, business managers and bass players.

Posted by Trip Aldredge at 3:57 PM No comments:

More on "These Kids Today"

My friend writer/producer/visionary R.S. Field (who deserves his own wing in the Rock and Roll Hall of Fame, if for nothing else writing "Miss Missy from Old Hong Kong") alerted me to a book which examines themes similar to what I wrote about in my last post. The book "Born Digital: Understanding the First Generation of Digital Natives" by John Palfrey and Urs Gasser is reviewed here: www.alternet.org/story/109068. The review itself is very insightful. Clearly, to paraphrase, "something is happening and we don't know what it is..." but I think we are just beginning to understand the implications for intellectual property rights in the future.
Posted by Trip Aldredge at 2:52 PM No comments:

These Kids Today: An Attitudinal Shift

I have taught copyright law on an undergraduate level for a number of years. Recently, I have begun to notice a major change in my student’s attitudes. For years, while discussing the impact of new technology on copyright law, I have taught the case UMG Recordings, Inc. v. MP3.Com, Inc. (SDNY 2000) as an example of the arrogance of some of the early internet companies in their wholesale infringement of copyrights. In that case, the aptly named defendants blew what appeared to be a brilliant business strategy (they could have beat iTunes to the party) by introducing a new service which on the surface appeared to offer customers a place to store their cds online, but in reality involved the company “ripping” thousands of cds without permission from either the sound recording copyright owner or the music publisher. This seemed to me to be basic copyright infringement; the second circuit agreed.

A more recent case, although larger in both aspiration and scale involved the Google Library project, with its stated intention to scan nearly all existing important books online, irregardless of copyright issues. This case, The Authors Guild et, al. v. Google, Inc. was recently settled. The settlement is probably beneficial for both Google and society as a whole but it would have been fascinating to see how Google’s fair use defense would have played out on such a grand scale.

What is more interesting (and perhaps more frightening) is the reaction of my students to these cases. Whereas five years ago my students had a knee jerk response to the MP3.com case (“string ‘em up”) they now seem to question why the company was even hauled into court. They have the same reaction to the Google case, as if they just assumed both actions would be protected by fair use.

This is an interesting development and is clearly linked to the growth of the internet and its prevalence in our lives. I don’t know why much more anecdotal information is needed to show why sales of physical music product is down but this may have broader implications from everything from libraries to network television. It may also prove the maxim that I have been blindly espousing for years: that the law cannot keep up with technology.

Posted by Trip Aldredge at 1:50 PM No comments: