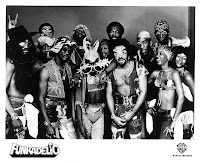 Every now and then a copyright law case just makes me smile. Such was the case with the recently decided Sixth Circuit case, Bridgeport Music Inc. v. UMG Records, Inc. case from the Middle District of Tennessee, one of the many Bridgeport cases that have been lingering in this district for the past nine years. Someone could (and should) write a book about this litigation, most (if not all) of which concerns the creative output of the great George Clinton.

The importance of this case was the finding that the 1998 song “D.O.G. in me” by the group Public Announcement infringed Clinton’s composition “Atomic Dog” by using the phrase “Bow wow wow, yippee yo yippee yea.” In other words, the Court determined that “bow wow wow, yippee yo yippee yea” possessed enough originality to make it capable of copyright protection. Also, in regard to another part of the decision, there was expert testimony to the fact that the elements of Clinton’s song were not just “the mere abstract idea of a dog.” In fact, the expert testified that in Clinton’s song “the word dog constituted a stand-alone melody of one word.” This should be obvious to copyright lawyers and fans of Parliament Funkadelic, but it is nice to see it substantiated in the United States Court of Appeals.
Posted by Trip Aldredge at 11:33 AM No comments: