I read last week about the death of former Chancellor Irvin Kilcrease, Jr. If I recall correctly, I tried my first real case in front of Chancellor Kilcrease back in the 1980’s. He was patient and unfailingly polite with me as I systematically forgot each of the Rules of Civil Procedure (remarkably, we still won). I noticed those same qualities in Chancellor Kilcrease every time I appeared in his court until the time he retired in 2003. I also remember thinking that he really took the time to understand the litigant’s arguments before ruling.

I really admired this gentleman and I don’t think we’re going to see a lot of judges like him in the future.
Posted by Trip Aldredge at 12:23 PM 1 comment:

Let us Now Praise the Boy King Of Tokyo 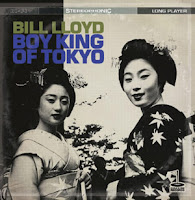 I can’t remember the exact year I actually met Bill Lloyd but I remember that I heard him before I met him.  Vanderbilt’s radio station played his song “Feeling the Elephant” often.  Having just moved back to Nashville to begin a career in entertainment law, I took this as a good sign.  Nashville was producing power pop – with great lyrics and lots of guitars and I was in the right place.
I finally met Bill through my dear friend Mary Divney.  For some reason we ended up at Bill’s apartment and I admired his record collection – just like my own, only on steroids.  Since that time I cannot tell you the number of artists Bill has introduced me to or increased my appreciation of (the Beach Boys for starters).
But all of this is kind of insignificant next to the fact that Bill has been a great friend for the past 25 years or more and I’ve had a rare vantage point to see his development as an artist and a song writer.  Bill has had a fascinating parallel career as a successful country song writer/artist and as an indie rock solo artist. The music that Bill has recorded with Foster & Lloyd is cool (and I think has developed an almost archetypal sound in country music) but for my money, its Bill’s solo albums (five proper albums plus scads of compilations, etc.) that set him apart.  I was always proud of the fact that my law partner and I were able to negotiate a “solo indie rock” exclusion into Foster  & Lloyd’s RCA recording agreement and that his first solo album came out about the same time as his major label country debut.
Bill’s solo records have never really varied sonically over the years, and that’s a good thing: lots of guitars, drums and smart insightful lyrics. Part of the reason for this is that he’s used many of the same cast of characters on his records.
Which brings us to the new album: “Boy King of Tokyo”.  The difference on this album is that Bill plays all of the instruments as well as handling all of the vocals.  This of course puts him in that unique camp of overachievers like Paul McCartney, Todd Rundgren and Emmit Rhodes.  It’s also astonishingly tight – you’d never know this was one guy.  The instrumentation does not detract from the quality of the songs.  “Boy King Tokyo” is a wry  bit of autobiography (dig the cover art), “The Best Record Ever Made” is a nice sequel to the earlier “Cool and Gone, “ and the songs “Let It Slide,” “Up in the Air” and “Where Nobody Cares at All” all feature that  rare combination of rock and roll sensibility and (God help me) maturity.
There’s a lot more here.  You need to own all of Bill’s records but if you don’t have them this is a good place to start.  The CD is available through Bill’s web site (billloydmusic.net) and through all the usual download sites.  Here’s to another 25 years of friendship and great records.
Posted by Trip Aldredge at 3:59 PM 2 comments:

I think that this is what the social medial folks call “trending”. I have had three calls in the last couple of weeks from clients who wanted to know why they were being asked to pay additional fees to the Patent and Trademark office after I had already quoted them the exact fees for their trademark registration applications.

After some investigation I learned that there are companies out there – I hesitate to call them scam artists – who send letters to trademark applicants (whose names and addresses are readily accessible from the trademark office online data base) on very official looking letterhead in a very official looking envelop informing them they need to pay additional fees for a variety of services. None of this is necessary. These fees don’t go to the U.S. government but instead to a private corporation who offer a variety of services none of which have anything to do with registering or maintaining your trademark.

The small print on the letters is instructive. On the one I reviewed it actually says “This is not a bill. This is a solicitation. You are under no obligation to pay the amount stated above unless you accept this offer. This product or service has not been approved or endorsed by any governmental agency and this offer is not being made by an agency of the government”. You would think that this would convince most people of the non-official nature of the communication but right next to this in bold print it says “FEE $375 Reply By: NOW DUE.”


There are some companies that offer the one service that I wish the trademark office would find a way to offer – monitoring the time periods and alerting applicants as to when they must file their renewal documents (this is a struggle for both applicants and law firms to keep up with). I have no idea how reliable these firms are or if they will even be around in five years – or whenever the applicant needs to remind the trademark office that they are still using the mark.

The bottom line is this – if you are pursuing a trademark application and you get something sort of official looking in the mail – ask your trademark attorney before writing a check
Posted by Trip Aldredge at 6:03 PM 2 comments:

I am not going to pretend to understand the intricacies of the Supreme Court’s ruling in Golan v. Holder but I am interested in any copyright case that makes its way to the United States Supreme Court.

This case involves the Supreme Court affirming Congress’s 1994 amendment to the Copyright Act which retroactively restored copyright protection to certain foreign works previously thought to be in the public domain in the United States. The rationale was to bring the United States into compliance with the Uruguay Round Agreements Act treaty and cause United States’ works to be awarded reciprocal protection overseas.

The bottom line is that works by Prokofiev, Stravinsky and Shostakovich, books by J.R.R. Tolkien, H.G. Wells and George Orwell as well as paintings by Picasso are still protected by U.S. copyright. I get this (although as an aside, I am always amazed to discover that many so-called classical Russian composers actually were products of the 20th Century). What confuses me is how this U.S. law intersects with the laws of many European countries which inject copyrights such as sound recordings into the public domain after 50 years. This has always seemed inconsistent to me. It does appear that copyright law continues to erode the concepts of limited duration and public domain and extend the period of protection for creative works.
Posted by Trip Aldredge at 11:46 AM No comments:

The Miller Music Case: Correct but not Fair

Sometimes copyright law is correct but not fair. The U.S. Court of Appeals for the Sixth Circuit issued its ruling in the closely watched copyright case Roger Miller Music, Inc. v. Sony/ATV Publishing last week. The opinion, which I am sure comes as a tremendous disappointment to the Miller family clarifies an important question in copyright law; that is what happens when an author of a pre 1978 copyright dies before the renewal right in the copyright as vested.

The holding in this case is not abstract – it relies on a straightforward reading of 17 USC Sec. 304(a)(2)(B)(i). However the court's opinion does disturb what might have been a long-held belief about the Copyright Act’s application to pre 1978 copyrights and their renewal terms.

The result, as the court said, is that "Roger Miller was entitled to the renewal copyright because he was living at the time an application for registration was made. Sony was in turn entitled as Miller's assignee and thus took ownership at the time the renewal vested on January 1, 1993.

This is the correct reading of the statute of course and on a purely philosophical level, it appears to be the correct result. However it seems to expose one of the vagaries of the Copyright Act and the commonly held belief that if an author died before the commencement of the renewal term, the rights went to his heirs automatically. The entire concept of the renewal term, which existed from the time of the Statute of Anne until the Copyright Act of 1976, was intended to give authors the proverbial "second bite at the apple" and to correct deals made when the author had an uneven bargaining position. The fact that publishers began to abuse this system by requiring authors to assign both the initial term and the renewal term of the copyright appears to have been an un intended consequence with was only remedied by the 1976's Act introduction of the 35 year termination of assignment provision and the introduction of the unitary term of copyright. However for authors who assigned works up to the end of 1977 the bizarre operation of the whole renewal concept remains murky and unfortunate. It seems unforgiving to require the operation of a renewal term to depend on something like the author's time of death and to have even that trumped by a publisher filing an application for renewal just seems inequitable.
Posted by Trip Aldredge at 1:53 PM 2 comments: