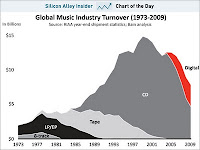 Reading Lindsay Ferrier’s recent piece
in the Nashville Scene on the death of video rental stores started a wave of nostalgia which I have not yet been able to shake. When I teach my copyright law class, I tell students about the 1983 Sony Betamax case, and the fact that, for a brief period of time, before the Supreme Court stepped in, the sale of videocassette recorders was potentially illegal in the United States. The motion picture studios thought these devices would lead to rampant copyright infringement. I try to get my students to imagine this time the 1980’s, when a lot of this revolutionary technology was being created, and they have no idea what I am talking about.

This then reminded me about the summer of 1982, when I was clerking for a Nashville entertainment law firm. One of my biggest memories from that summer involve one of the firm’s clients (a cutting edge Nashville band that I hate to label as “New Wave” – but, hey, it was the early ‘80’s) who was about to release their own independent EP. I don’t know if Jason & the Scorchers had released their first EP yet, but the concept of a band being able to release its own independent recording, without the assistance of a major label – was really mind-blowing. It seemed impossible. My other significant memory of that clerkship was reviewing a license agreement for one of the first compact discs. I believe that the label in question was contracting directly with the manufacturer, Phillips, to manufacture the disc. At that time, we thought of those things as novelty items for high-end audio buffs.

I contemplate all these developments not to date myself, although that is a by-product of these ruminations, but to demonstrate the constant march of technology and the curious and often parallel tracks of art and law. I can’t help but think about this attached graph (which made the rounds on the internet last week) showing the rise and fall of the compact disc market. In many ways, 2011 feels like 1982 again, without the big hair.
Posted by Trip Aldredge at 3:03 PM No comments: