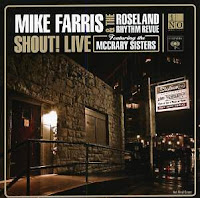 This is cool. I just learned that my friend and client, Mike Farris won a 2010 Dove Award in the category of Best Traditional Gospel Album for his stunning album "Shout!Live". The album features Mike's cool band The Roseland Rhythm Review and Nashville's McCrary Sisters and was co-produced by Mike and Joe McMahan. Mike has had an interesting and surprising career from his days as the lead singer of the Screamin' Cheetah Wheelies and this award is a vindication to all of those people (both here and beyond) who bekived in his talent.
Posted by Trip Aldredge at 12:16 PM No comments:

I am not really in the habit of writing movie reviews on what is ostensibly a music and law blog. However, I have been thinking all week about a movie I saw at The Nashville Film Festival called "Why isn't Chris Von Sneidern Famous?"

I have been vaguely aware of Chris Von Sneidern and his jangly guitar pop for years. I may have a couple of his albums and he has appeared on the same compilations as some of my clients like Bill Lloyd and The Shazam. The idea of watching a full length documentary about him was somewhat daunting.

What I realized as soon as the film began was that this really wasn't a movie exclusively about Chris Von Sneidern. It was also about its filmmaker, Kathleen McNamara, who started as a fan trying to figure out why one of her favorite artists was not better known. Having spent a lot of time trying to secure record deals for artists I believed passionately in, I could relate to her quest. The film is also a kind of elegy for a time which appears to have passed, when there was a thriving independent record scene in this country: when independent labels with some financing existed as a viable alternative to the major label system (Independent labels still exist, of course, as do majors, it’s just that the whole calculus has changed).

Finally the film is about Chris Von Sneidern who emerges as the kind of songwriter and artist who is going to write songs and play gigs regardless of the remuneration, his age, or any other factors. The film is a bit uneven, a little sad, but at its core, I found it quite inspirational (and I am definitely going to go check out those Chris Von Sneidern records). I don't know how the film is being distributed but it is worth looking out for
Posted by Trip Aldredge at 3:45 PM No comments: