Howlin' Books and Grimey's Too

I am a sucker for book stores and used record stores; combine the two and I can become disoriented.  That happened this weekend when I attended the grand opening of Grimey's Too, the new expansion of Mike Grimes and Doyle Davis’ Grimey's Records operation.  This was a natural expansion, Grimey's needed more room for its “gently used” records.  The real surprise was the inclusion of Howlin’ Books in the mix.  This store is the new joint venture from my long-time friends Jessica Kimbrough and Gwil Owen and it is a wonder.  In addition to being a genuinely gifted song writer, Gwil has been a book scout for years and his collection is mind boggling.  The music book section alone is staggering. On Saturday, I kept bouncing like a pinball between books and records.  As in all great book/record store experiences, I found several things I didn’t know I needed.

The store also has a nice selection of new books, magazines and a coffee shop.  I am really excited about this addition to the landscape.  With Rhino Books, Book Man/Book Woman, Elders, Joel Tomlin’s place in Franklin and new ventures like Parnassus and the fascinating minimalist East Side Story,  Nashville is really becoming an interesting place for book lovers and it continues to be a great place for record geeks like myself.  Please support Howlin’ Books and Grimey's Too.
Posted by Trip Aldredge at 9:57 AM No comments:

The Other Side of Nashville


I lost a whole weekend a few weeks ago, absorbed in Rev. Keith A. Gordon's new book "The Other Side of Nashville:  An Incomplete History and  Discography of the Nashville Rock Underground 1976-2006".  I bought the book almost out of a sense of obligation and with a bit of nostalgic dread – I assumed that many of the Nashville bands I worked with in the 1980s and 1990s would be represented.  The book is so much more – a 609 page collection of all the artists who contributed in one way or another to the creation of Nashville's rock music scene.  It is a fascinating read – from the early DIY recordings of R. Stevie Moore (which I used to buy via mail order from New Jersey with no idea that Moore was a Nashville native raised in the music business) to the Scorchers and Praxis era onto the Kings of Leon – this is a hell of a 30 year ride.

But while it's great to read about the bands we all know and love (or hate) it's even more interesting to read about and remember the bands that have been lost to the ages.  There are plenty of them and I am going to resist the urge to catalog them here.  It is fitting that Keith gives each of these artists their proper place in the continuum.  He also touches on a lot of important people who operated behind the scenes. 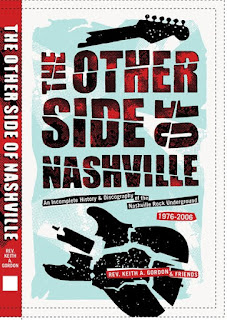 While this is fun and interesting reading in 2013, I have a feeling that this book is going to be an important historical document in the years to come.  Keith clearly has the heart and soul of a researcher and he is able to put all the issues of magazines like The Metro and Nashville Intelligence Report to good use, providing lots of historical context along the way.

My only problem with the book is that the layout is a little confusing but that is probably to be expected with such a massive undertaking.  For anyone with a passing interest in Nashville music (or independent music scenes in general) over the past four  decades, I highly recommend Keith's book.  Read more about it here:

Posted by Trip Aldredge at 9:10 AM No comments: 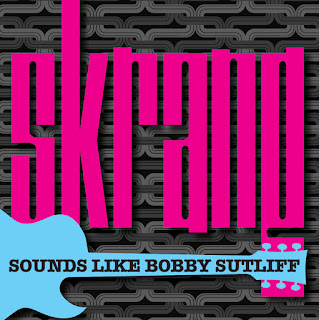 One of the major  privileges of my law practice has been the opportunity to work with some great artists who are also exemplary people and though many of these folks come to mind, I am thinking today of Bobby Sutliff, Tim Lee (and Tim's partner in crime Susan Bauer Lee).  Meeting Bobby and Tim back in the late 1980s was a revelation.  Not only did they play the kind of music that I love ("jangly guitar pop" as it was called back then – smart guitars, with intelligent lyrics and did I mention guitars?).  The bonus was discovering that these guys were funny as hell.  Tim and Bobby became fast friends. My conversations with Bobby increased my knowledge of music exponentially.

I was a fan of their together records as the Windbreakers (they were the kings of flannel) and especially Bobby's first solo album "Only Ghosts Remain" as well as Tim's two records on Coyote.  To my mind, these were among  the best of that era.  Bobby and Tim are both gifted songwriters. They both continue to make music and Tim has now partnered with his wife Susan to form the Tim Lee 3.

Last summer Bobby was involved in a near fatal automobile accident.  I don't know all the details but I do know that he seems to have made a substantial recovery.  Like many musicians (hell, like most people) the medical bills have been challenging and  with Tim leading the charge, Bobby's friends have rallied together to raise money for him in the best possible way, by recording an album featuring his extraordinary songs. The proceeds will benefit Bobby and help him with his medical bills.  Among the performers donating their talents on the album "SKRANG – Sounds Like Bobby Sutliff" are Velvet Crush, John Stirratt from Wilco and the Autumn Defense, Matt Piucci, Peter Holsapple, Russ Tolman and my buddies Bill Lloyd and Will Kimbrough.  There's some great music on this disc and it's for a great cause.  This also serves as a fine introduction to the songs of Bobby Sutliff.  You can order the CD from Paisley Pop Music: http://www.paisleypop.com/store/
Posted by Trip Aldredge at 8:58 AM No comments: