Book Report: Baby You're a Rich Man: Suing the Beatles for Fun and Profit 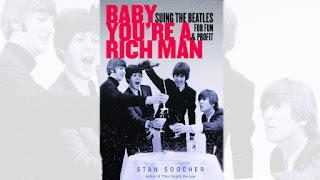 Stan Soocher has written the Beatles' book that I have been waiting for. is a detailed examination of nearly all the important litigation surrounding the Beatles from the unraveling of Brian Epstein's ill‑advised early merchandising deals to their deep, complicated and litigious relationship with Allen Klein.  Don't be put off by the "legal" nature of this book.  Soocher is an entertaining writer and he has a gift for bringing out the personalities of many of the people who previously served as mere footnotes in Beatles history (like Pete Bennett, David Jacobs, Nicky Byrne, Nat Weiss, John and Lee Eastman and Walter Hofer).  As an aside, Soocher's first book They Fought the Law:  Rock Music Goes to Court is also a must-read.
Baby You're a Rich Man:  Suing the Beatles for Fun and Profit

Soocher goes into great detail about topics that I have always been curious about.  For example, the aforementioned merchandise debacle, the fight over Northern Songs, the IRS problems surrounding the  Bangla Desh concert, Paul McCartney's suit to end the Beatles partnership, the crazy dispute between John Lennon and Morris Levy which resulted in the Roots album, Lennon’s immigration struggle   and even the tragic battle between George Harrison and Dennis O'Brien which resulted in a St. Louis bankruptcy court punishing Harrison for his inability to attend a deposition, mere weeks before his death.

The real paradoxical character in the whole Beatles saga remains Allen Klein.  What would cause him to purchase the copyright to "He's So Fine" and litigate against his former management client – a clear breach of fiduciary duty?  Even more astonishing what would motivate a man who as manager for both the Beatles and the Rolling Stones (among other top artists) was privy to some of the most spectacular music industry deals of the era – to run a side business selling promo copies of his artists' records for a few extra bucks?  (There is a new Allen Klein biography by Fred Goodman which I really need to read).

I already thought highly of Stan Soocher as an attorney and a journalist before I read this book.  I am really pleased that he tackled this complicated topic with great skill.  I hope we can convince him to take up the challenge of writing about the Beach Boys' litigious career next.
Posted by Trip Aldredge at 4:08 PM No comments: