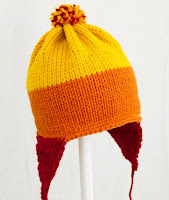 Have you ever seen Firefly?  Yeah, me neither.  In fact, the only way I know about the TV show was through my wife and her super smart friends.  Nevertheless, I was fascinated to read about a legal skirmish that had broken out over a particular orange and yellow ski cap that one of the show's characters wore.

Apparently, fans of the short-lived show began knitting copies of this cap and selling them on such websites as Etsy and Café Press leading Fox Television to send cease and desist letters to the sellers because sales of the homemade caps were interfering with their own licensed version of the cap.

An article in last month's American Bar Journal  by Anna Stolley Persky explored the whole complex  area of fan art – where the desires of obsessive fans to replicate artwork from their favorite movies, books  or television shows runs into copyright infringement claims from the creators of those works.  All of this is a little vague.  For example, can a yellow and orange cap actually be capable of copyright protection?  Even so, is the fan's creation a derivative work or a protected fair use?

This reminds me of stories I heard when I was younger of the Walt Disney Company going after mom and pop bakeries who innocently put Mickey Mouse on a birthday cake or ASCAP going after the Girl Scouts for singing songs around the campfire without a license. It is an interesting dilemma for all parties.   One thing a copyright owner must consider is that by trying to stop the fans from creating fan art they risk alienating their fan base.  Also, this is a question of degree – I still can't fathom why Fox would have a problem with a guy selling a Firefly inspired cap but I can of course understand by DC Comics would sue to stop the sale of unauthorized Batman costumes.

The article ends with two very good pieces of advice for those who want to create and market fan art.  Quoting Attorney Ruth Carter, the author states:

First, don't base your entire business on using somebody else's copyrighted work without permission; and

Second look at the history of the copyright holder: Does he or she have a record of going after people who make fan art?

This is sound advice (especially the first part!)  because at the end of the day if a copyright holder (or trademark owner) has the will and the resources to stop the distribution of fan art, all of the fair use arguments in the world will be of little practical value.  I remember that years ago I represented a gentleman who was marketing a piece of memorabilia associated with    a recently deceased celebrity.  He had received a very serious cease and desist notice. Because of the facts of the case my client had some strong arguments on his side. When I made these arguments to the estate’s  lawyer, he politely listened and then invited me to review the list of recent litigation targets they had gone after.  It was impressive and needless to say my client ceased and desisted.

With the proliferation of media outlets and the endless growth of the internet, the rise of fan art culture will continue to grow and thrive, from caps to fan fiction and beyond.  I think this is an area to keep an eye on.
Posted by Trip Aldredge at 3:16 PM