On The Legal Status of a Rock and Roll Band

Dealing with disputes among band members (and former band members) is one of the most difficult areas an entertainment lawyer can get involved with.  The legal organization of a musical group involves intersecting area of corporate law, copyright law and trademark law, as well as basic human emotions.  When group members function together in perfect harmony their business models can be a source of inspiration.  However, when human conflicts enter the picture, even the best organized entity can show its shortcomings.

I have read about two interesting cases recently.  The first involves the 1980's band Queensryche.  According to published reports, the band's corporate entity voted to remove founding member Geoff Tate as lead singer of the band, following a Spinal Tap-like series of events.  The other band members apparently set forth very good reasons why they felt they could no longer continue with Tate in the band and based on provisions set out in their original partnership agreement, they expelled him-subject to a duty they recognized to account to him for his share of profits.  In order to avoid even further controversy, the "new" entity even began performing under a different name, "Rising West" to avoid potential trademark problems.

Nonetheless, Tate has sued his former partners alleging a host of indignities the most significant being corporate oppression.  This seems to be a text book case in using corporate law to attempt to wrestle some benefit out of an entity and to essentially punish former band mates from working without him.  This scorch the earth technique is far from certain in most cases, especially those involving human feelings and egos. 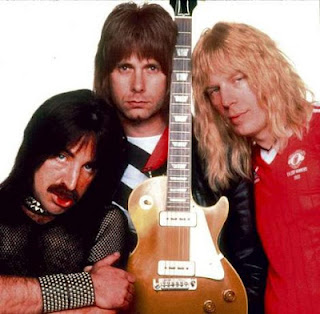 An even stranger case  I just read about involves a former member of the J. Geils B Band who happens to be named J. Geils, who is apparently involved in a trademark battle with his former band mates.  It seems that both J. Geils and the J. Geils Band (under their corporate entity T& A Research and Development Corp.) have filed competing trademark applications to try and protect the band's trademark.  This has apparently led to litigation in both the Patent and Trademark Office and in federal court. Buried in the evidentiary murk of all of this, is the fact that at some point in the past all the band members signed a shareholders agreement restricting their right to use the name "J. Geils Band" independently.  If that is true, we may end up with a case of an individual being able to perform under his own name due to activities he once undertook as a shareholder.

All of this seems to demonstrate the point of this tale,  which is that dealing with disputes among band members is usually very, very difficult.  I've been involved in a lot of these disputes and I can say that more often than not, corporate structures and shareholder agreements as well as form cookie cutter LLC agreements have been virtually worthless in resolving these disputes; while a good well thought out partnership agreement always seems to be both enforceable and convincing to all parties involved.  The moral here is that a band needs to have these discussions early on in their careers and to commit their agreements to writing in a cogent, equitable manner.  It is a discussion that no band wants to have, but it is absolutely vital.

I am usually able to craft a shareholder's agreement or operating agreement to cover all the issues. Do you prefer a partnership agreement? Steve

Steve, what I was trying to say is that so many of these entities just use form agreements (or in the case of an LLC, perhaps no agreement). I think the important point here is to have the discussion and then reduce it to writing.