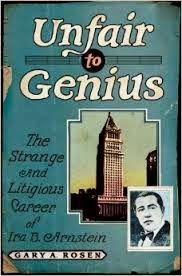 Anyone who has been around the music business for any length of time begins to assume that certain things are immutable and it shakes our foundations when their existence is threatened.  For example, the recent   We may all grumble about these organizations but it feels strange to look at a future where their relevance is diminished.  Of course,  in the grand scheme of things these are relatively recent institutions. ASCAP was founded in 1914, BMI followed in 1939.  The history of both organizations-their early competition and their interaction with the US Department of Justice is fascinating.
attacks on BMI, ASCAP and SESAC.

This is just one reason why I recommend Gary A. Rosen's book Unfair  to Genius (Oxford 2012).  On the surface, the book is about (as its subtitle states) "The Strange and Litigious Career of Ira B. Arnstein."  Arnstein was a little-known Russian-born composer who with some sense of self-delusion and bravado waged a one‑man war against some of the most famous composers of the 20th century (such as Irving Berlin and Cole Porter) together with their publishers, as well as BMI and ASCAP.  Arnstein literally believed that everyone was either infringing upon his work or conspiring to cover up the infringement. He filed countless lawsuits, many pro se, including one which counted 23 defendants.

From a legal history standpoint,  this book is compelling in its exploration of  the early history of modern copyright infringement litigation in this country.  That sounds like a dry premise but in reality, many of the concepts that define copyright infringement litigation were developed in these cases and in the judge’s opinions. The bonus is that the book also chronicles the beginnings of the music publishing world as a big business, shows in captivating detail the early rivalry between ASCAP and BMI and brings such characters as Edward B. Marks, David Sarnoff, Judges Jerome Frank and Learned Hand to life.  One of the most colorful characters in the book is Sigmund Spaeth a self-described musical detective and a name I remember dimly from my childhood. Who knew that he was the first celebrity expert witness?

I have yet to read a better account of the music business in the early 20th century and like all good histories, the book provides perspective to some of the current problems facing the music industry.
Posted by Trip Aldredge at 2:07 PM